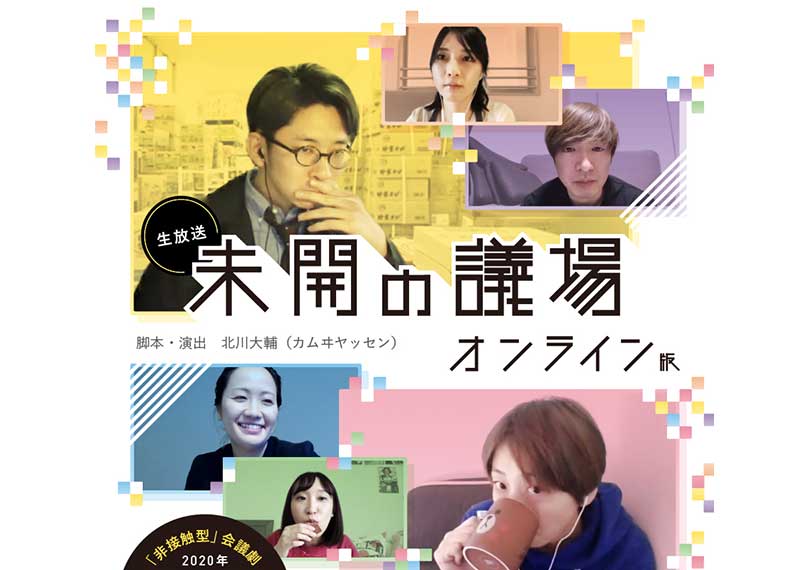 【Story】
A new conference play that no one meets anyone is about to begin.
The organizing committee of a festival hosted by a shopping arcade in a town is to hold a meeting online due to a disease that is currently prevalent.
What was supposed to be a harmonious meeting to check the progress of the project, however, goes in an unexpected direction due to very little misplaced buttons.
In the coming immigration era, the acceptance of foreign labor has become one of the social issue in recent years, and this two-hour, one-act congress drama depicts problems with foreigners in Japan.
Let's take a peep at their meeting in front of PC screens together.

Now 13 impressive actors have gathered to have a meeting in front of their own webcam.
And the meeting becomes a play when you, the 14th participant, join them.

The other day I had a completely different online meeting, and at that time I came up with an idea. I found a script from my work that seems could be used to realize the idea and I tweeted about it offhand at the end of March. Thankfully, incredible actors stepped forward to this plan. Then I assigned the producer to a bulldozer-like guy and thus the plan came together in such a short time just as a year-end construction of Japan.

Amid the recent situation, I had been seeking for a breakthrough with stage actors, and at last, I decided to have it a go. Although there are many first-time experiences for me such as online rehearsals and simultaneous global release play, in such hard times we can't go outside, I really hope you enjoy watching our show in front of your own screen.

We are looking forward to 'e-meeting' you at the online conference space.